In the Innovation and Demo Centre (IDC energie) the 2SaveEnergy greenhouse was first used in October. In this greenhouse, consisting of a combination of glass and an ETFE film that creates an insulating cavity in the greenhouse covering, we are currently changing the crop.
Researcher Frank Kempkes describes his experiences with this greenhouse. 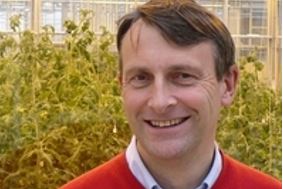 ““As we are between crops at the moment, it’s a good opportunity to conduct experiments that you can’t do when there is a crop growing. Because the IDC-energie has only small greenhouses of 450 – 500 m2, the walls of these greenhouses exert a great influence. That is why they are fitted with a separately controllable wall covering. Another point of discussion is ‘how much does the greenhouse leak’. That influences the CO2 concentration, moisture balance and heat loss from the greenhouse. This is the moment to look to this and make some estimates.

We determined the loss through leakage from the greenhouse by increasing the CO2 concentration to 2000 ppm, then stopping the addition of CO2 and following the decrease in CO2 concentration as an indicator of the leakage. The rate of reduction became our estimate of the leakage from the greenhouse. We found that the 2SaveEnergy greenhouse is a well-sealed construction. The greenhouse was built well. The heat loss from this greenhouse is somewhat more than from the comparison greenhouse, as expected, but the latter is built with insulating glass, so we are satisfied with the result.

The winter is not really setting it, only the weekend after Christmas appeared to be winter-like. We had snow, which allowed us to test whether the proposed defrost/snow-melting system of the double greenhouse covering worked properly. When it started snowing, the cavity ventilation was turned on, and the vent opening was reduced to 1%. The clever placement of the sealing rubbers meant the cavity did open, but the air blown through the cavity remained in the greenhouse. Only when the vents were opened further could the greenhouse air actually flow outside. The cavity ventilation drew greenhouse air from under the screen, and it was then blown via the gutter and the condensation vents in the gutter into the cavity. The heating capacity achieved in this way is small, but that doesn’t have to be a problem.

The snow that fell was a mixture of snow and rain while the air temperature was just above freezing. These conditions were not optimal for testing, but what we observed is that there was definitely no large accumulation of snow in the gutter. Hopefully, we will have a period of constant frost with snow later in the season so we can conduct another test.”
This project is an initiative of AGC, Boal Systemen, VDH Foliekassen, Van der Valk Systemen, in collaboration with Wageningen UR Glasshouse horticulture. It is being financed by the Kas als Energiebron programme, the innovation and action programme of LTO Glaskracht Nederland and the Ministry of Economic Affairs (EZ).