There is a limit to energy savings 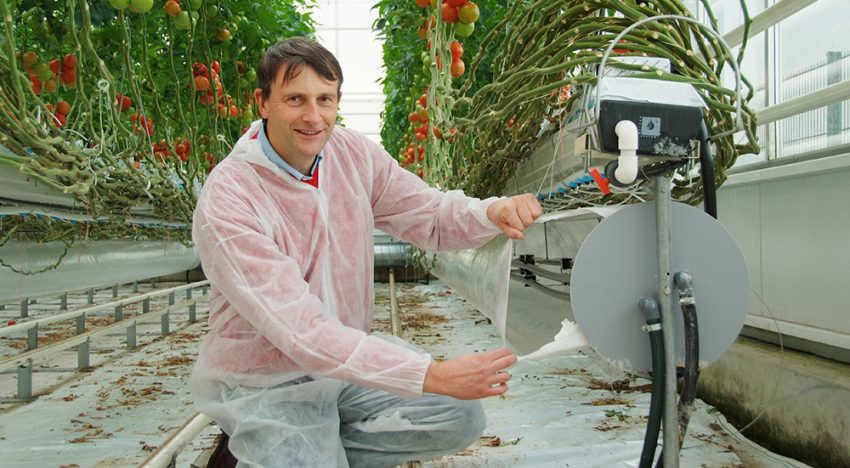 The advances in energy-saving or self-producing greenhouses are regularly reported in the news. Researcher Frank Kempkes tells us about the common theme in the projects of IDC Energie, part of the Greenhouse as Energy Source Programme. What has been achieved, what is still possible, and where the limits lie.

There’s still 3 years to go before 2020: that’s the year in which new greenhouses in the Netherlands have to be energy neutral. In addition, techniques must be available for existing greenhouses that allow them to function well while using only half of the energy consumed compared with 2011. These are still very ambitious goals of the Greenhouse as Energy Source programme. They form the core of the Meerjarenafspraak Energietransitie Glastuinbouw [long-term agreement on energy transition in the horticultural sector], signed by the government and the business community.

It all started soon after the beginning of the new century with the competition ‘The Greenhouse as Energy Source’. The underlying idea was to transform the horticultural sector, bulk consumer of natural gas, through a surge in innovation into a sector that supplies excess energy to others. This ambition, partly encouraged by political policy, has been tempered over the course of time to a more realistic approach. Concepts like the energy-producing greenhouse, Sunergykas and the Flowdeckkas have been abandoned, and the experience gained has been applied to approaches more suited to the horticultural practice. Supported and constructively criticised by the business community, the IDC Energie in Bleiswijk (see box) continues working on techniques to lower energy consumption and find ways to implement the remaining quantity of ‘green’.
The government and the business community have actively stimulated the development of energy-saving greenhouse and cultivation concepts with the Greenhouse as Energy Source programme. In the meantime, retail buyers of vegetables, fruit and flowers are also starting to think about requirements in the field of energy, ascertained Frank Kempkes, researcher at Wageningen University & Research and also project leader at IDC Energie. They are all reasons to continue innovating.

The greenhouse with the lowest energy consumption is still the VenlowEnergyKas. It has a double-glazed cover, with three glass sides given an antireflection coating and one a coating that reduces the infrared emission. Air conditioning units take care of dehumidification with a balanced ventilation system which warms up the dry incoming air with moist outflowing greenhouse air.

A tomato crop without illumination can cope in this greenhouse with 12.5 m3 gas per m2; that is 40% of the average in practice. However, around 12 kg of pure CO2 have to be purchased to keep the production at a practice level because in the summer hardly any flue gas CO2 is produced.

“But the high degree of insulation of this type of greenhouse also has disadvantages,” admitted Kempkes. “The cost price of the glass is very high, and with the current low energy price, the payback period becomes very long. There is also a problem with snow: when snow falls on the covering, it is almost impossible to melt it off with this glass combination. That makes it dark in the greenhouse, plus a layer of snow can be very heavy.”

These points influenced the development of the next concept: the 2SaveEnergy greenhouse.
In it, the double-glazed covering is replaced by a combination of glass on the outside and a high-pass permanent film (F-Clean) on the inside. “That reduces the investment considerably, and with a smart trick, the level of insulation can be temporarily reduced during a snowfall to melt the snow,” he explained.
This greenhouse was tested for a year in collaboration with the business community as proof-of-principle (proof that the concept works).
“The greenhouse certainly proved to produce good crop results, but the energy consumption was a bit higher at 15.5 m3,” he added. That was primarily due to a lack of heat recovery in the dehumidifier system, in contrast to the VenlowEnergyKas. This led to a revision of the greenhouse to create the 2SaveEnergy Plus greenhouse. It is now a highly insulated greenhouse with a dehumidifier system that the IDC successfully tested earlier. It recovers not only the sensible heat loss from the dehumidifying process, like the VenlowEnergyKas, but also the latent heat. The system is based on condensation of moisture on a cold surface and direct application of the heat released to warm the greenhouse by keeping the surface cold.

Increasing the level of insulation

Kempkes also envisages various other effective measures. “We could increase the level of insulation a bit by employing three screens: two aluminium screens (with a high insulation value and a low emission value) and one transparent cover,” he explained.
In the winter the greenhouse does not require ventilation to disperse moisture: no heat lost and all of the CO2 remains inside.
The researcher estimates that with these adjustments, a consumption of 12 m3 gas per m2  can be realised.
A further decrease would require adjustments to the cultivation method. Kempkes added, “Nowadays a tomato grower lets the temperature rise up high and then opens the vents in the pre-night to achieve a rapid cooling down, which is considered a generative action. Later in the night he has to start heating again.
We want to bypass the pre-night cooling down so that less gas is used in reheating. That will certainly lead to a heated discussion with the growers; savings are useful but ultimately a healthy and strong crop must be cultivated.”

That last measure may be responsible for saving a cubic metre, but at some point we run up against a limit. The limit is determined by the characteristics of horticultural crops. “A large part of the energy consumption is needed for evaporation. You can reduce this demand a bit by increasing the EC or by continuing to cultivate at an even higher humidity, but there are disadvantages with both options.”
This means that there is always a basic energy requirement to be met; almost all agriculture concerns plants that like warmth and must be able to transpire water. It is certainly possible to meet the remaining energy requirement in a CO2-neutral manner, he admits. With geothermal energy, for example, or a heat pump.
The latter option does consume electricity, but that is easy to generate in a ‘green’ way.

“You harvest 35 to 40 percent of the direct solar radiation in the form of warm water and thus reduce the heat burden of the greenhouse; the vents do not have to be opened as wide and the crop is bathed in a nice diffuse light. But there is a loss of light as a consequence. That only has a benefit with crops that cannot tolerate a high light intensity, making it a greenhouse for a special target group,” he explained. Ter Laak Orchids in Wateringen is the first company with a Daylight greenhouse. The current greenhouse there of 3,800 m2 is being expanded this year to 5 ha.

The Winter light greenhouse aims to use as much natural light in the winter with its modified construction, glass with the highest possible hemispheric transmission, a special W-shaped mounted screen with an improved screen material and maximally reflective construction components.

The greenhouse types described in this report are all test concepts. When translating the insights to their practical application, they are given a trade name. A good example is the IDKas, a practical implementation of the VenlowEnergyKas; the first one was built at Duijvestijn Tomaten in Pijnacker.
Elaborations of the first generation of (semi-)closed greenhouses with few vents include the Ultra-Clima kas from KUBO and the ActivAir system at Looije Tomaten, realised in a partnership between suppliers.
These systems are primarily interesting abroad where the climate conditions demand other greenhouse concepts.

The VenlowEnergyKas is currently the greenhouse concept with the lowest energy consumption. This concept has disadvantages, which have been compensated in the 2SaveEnergy greenhouse, but its energy consumption is a bit higher. Researcher Frank Kempkes runs through the various possibilities to reduce the consumption even further. The remaining consumption can be supplied in a ‘green’ manner.

The Innovatie- & Democentrum Energie tests and demonstrates greenhouse systems that can contribute to a drastic reduction in the energy consumption in the horticultural sector. This research facility stands on the grounds of Wageningen University & Research in Bleiswijk. Over the years, various types of greenhouse have been developed. Currently, it is working on the VenlowEnergyKas, Winter light greenhouse and 2SaveEnergy Plus greenhouse.

Energy-efficient designs always follow the path of the Trias Energetica. This strategy comes originally from the engineering field and has the following three steps, which are followed successively:
1. Restrict energy consumption;
2. Maximise use of sustainable sources;
3. Most efficient use of fossil fuels for the remaining energy requirement.
In the horticultural sector, innovation is taking place on all three levels. Step 1 involves insulation, air conditioning and Next Generation Cultivation. Step 2 is concerned with the maximum use of solar energy and the inclusion of geothermal energy. Step 3 is looking at cogeneration, low temperature nets and heat pumps.