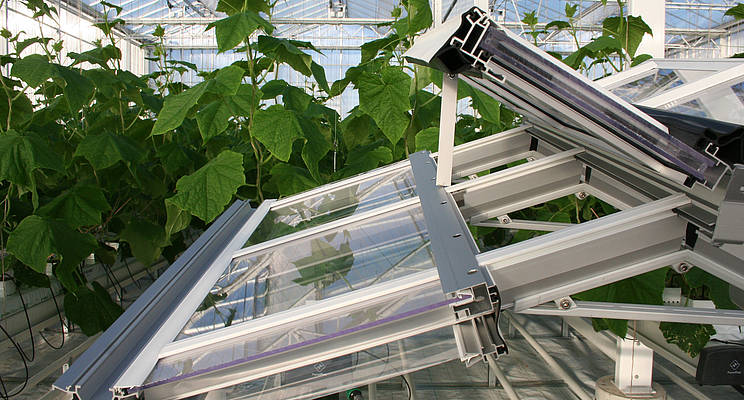 The 2SaveEnergy greenhouse was transformed in the second half of last year. It represents a step forward in reducing energy consumption without negative consequences for the crop. In other words, a strong crop for less gas, according to Wageningen UR Greenhouse Horticulture.

To reduce the heat loss even further, a second screen installation was mounted.
After extensive discussion and calculations, it was concluded that the optimal combination of screen material would be a double aluminium cloth on the existing system and a transparent cloth on the new system (lowest use). On a cold day just one screen can be closed during the day, and this was noticeable with the cold and dark weather in mid-February. But the real profit derives from the considerable savings from the double aluminium cloth during the long night.

A second important adjustment was made to the dehumidifier system. In the old situation there was a simple external air intake with subsequent heat exchange block and the disadvantage of a loss of sensible and latent heat when dehumidifying. “By adding in a heat pump, we could produce cold and thus dehumidify through condensation. The heat from the heat pump that was not required to warm the dried air back to greenhouse temperature was transferred to the pipe rail network. Once the system is running, there is a constant water flow from the air conditioning unit, so that functioned well. At the end of March, there was in total already 10 l/m2 of dehumidification with the help of the heat pump. We used 6 kWh electricity for this, which also produced 21 kWh of heat per m2. With the lovely weather at the end of March, the limitations of this system are becoming evident, we have an excess of heat. Since January 4, some 4.6 m3/m2 gas have been consumed.”

Snow is one of the topics requiring attention with this greenhouse concept. “Unfortunately, we cannot just order snow to fall, but two and a half years after completion, we had the first proper possibility to test the melting of snow. The gutter heating worked just as expected.”

On January 4, the tomato variety Cappricia (RZ) was placed in the greenhouse with a stem density of 2.5 st/m2 and on February 3, the plants were put on the holes in the mat. In week 6, an additional sucker is kept for 1 in 2 stems. “Unfortunately, given the poor light conditions in week 7, the suckers were too uneven so the next sucker was used to increase the stem density to 3.75 per m2. Cultivation was done as far as possible according to the principles of Next Generation Cultivation. By maintaining rather high temperatures, we tried not to let the crop get too heavy. Now with the 9th truss in bloom, the first fruits are beginning to change colour, and next week the harvest begins.”