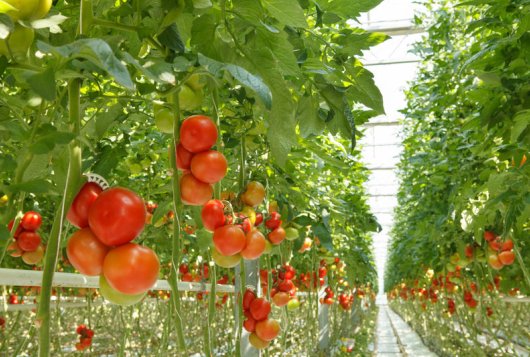 The cultivation of tomatoes in the energy-efficient greenhouse, built according to the 2SaveEnergy concept, held its own compared with the daily practice. The yield was around 65 kg/m2 in the 2SaveEnergy, while the energy consumption for heat of 12 m3/m2 was about half that at the practice level.

To save energy in horticulture, a consortium of suppliers and Wageningen University & Research realised several years ago an affordable, highly insulated greenhouse, the 2SaveEnergy greenhouse. This greenhouse is fitted with a layer of clear glass with a double-sided antireflection coating and an underlayer of high-quality diffuse F-clean film. The effect is a great insulation, almost as good as double glazing, but much lighter. By organising the greenhouse according to the principles of ‘Next Generation Cultivation’, great energy savings can be made.

Heating the greenhouse is more economical. The energy input for the boiler and heat pump amounted to a total of 12 m3/m2 of natural gas equivalents for this crop. The researchers also dosed less CO₂. The underlying idea is that in a horticultural sector without fossil fuels, the availability of CO₂ will be less self-evident. The dosage capacity of CO₂ was set at a maximum of 175 kg/hour/ha, not very low, but much lower than in practice situations.

The cultivation project ran from the beginning of January to the beginning of December. The yield was 65.4 kg/m2, which was comparable to the yield of practice companies. The specialist journal concluded that this demonstrated again that the 2SaveEnergy greenhouse in combination with Next Generation Cultivation and the availability of an alternative CO₂-source could realise considerable savings in terms of energy consumption.